We left Santiago last Thursday at 10:30 on an overnight train. We had wonderful overnight berths—beds on a train. You share the compartment with three other folks, two sets of bunkbeds. Before Jas and I went to bed, we walked down to the restaurant car for a few final beers. Each country in Europe has its own trains; the trains in Spain seem a bit more popular (common): in the restaurant car the menu was printed above the bar in a jaunty advertising font, and included a “Children’s Disney fun pack!” But that aside, train is still the classiest way to travel, and this train was no exception. Europe seems to offer countless ways to interact with your fellow man (or woman), preferably drink in hand. We chatted with our neighbor, a Spanish heavy metal enthusiast. At first when you begin studying a language, everyone seems impossibly distant and exotic. I know that I am getting capable when I can clearly see the Rocker within a Spaniard.

(“Rocker” must be international, allowing for the subtypes “American rocker” and “Spanish rocker”. Incidentally “to rock” exists as an anglicism in Spanish: “rockear.” Example: “Prepare to rock!” = “Que se preparen a rockear!”)

Rocker: “Yeah, man! I was at a rock concert in Portugal—you know, death metal, Panthera, Alice in Chains! Rock, it was awesome!”

Rocker: “Woah, you’re from the United States?! How awesome! You guys have the best bands!! I would love to go and rock there! Rock on!”

It’s great that so many of the people we met were genuinely excited and interested to meet us and to talk with us. That is the innocence or authenticity that I mentioned earlier.

The rocking of the train was annoying and I did not sleep well; plus the air conditioning was broken and the compartment was experiencing global warming. In the night I slipped on a shirt and walked to the bathroom in my skivvies. Everyone on the night trains goes about half-dressed at night. This intimate atmosphere makes me wonder how awful the terrorist attacks were on the Madrid commuter trains on 11 March 2004. When everyone thinks of the public transport as an extension of their living room, it seems like a bombing would be even more traumatic. I paused on my way back to bed and stared out at the moonlit countryside slipping by.

Madrid again felt very large and cosmopolitan, and it was hard on us. After coffee, we took the metro into the center at the Puerta del Sol. What a mess: dirt and construction. We got an overpriced room in a dirty little hostel, bought some new clothes (my brother threw away his nastiest camino-wear), and went out to see the city.

I don’t know why Madrid is not more known. It seems that in the US we always hear about Paris and Rome. Perhaps it has to do with the World Wars and the mass of American soldiers who passed through those cities. Madrid is extremely historic, with beautiful architecture—the buildings seem more liberated than we see in the US.

For example, imagine a large pure white granite building towering over you, crowned on top with a huge, black statue of a greek goddess. That is the Metropolis Building.

A certain Palacio de Comunicaciones is popularly known by the inhabitants of Madrid as the Cathedral of Communications because it is so overly decorated. 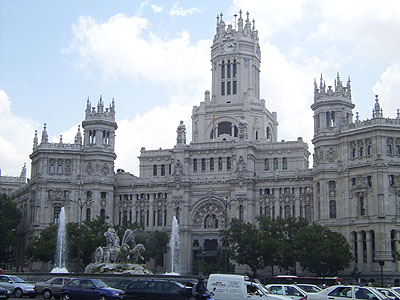 When we tired of riding on the tourist bus, we descended and drank beer on a side street. We were just off of the Gran Via, a high class shopping street, but in the space of a few yards, the ambiance turned quite lowbrow. Alarming women lounged outside of a “sexy shop.” Two drunken guys leered and called out to pretty girls, who quickly went somewhere else. However, coexisting with this was a family playing Uno and other board games, groups of girlfriends gossipping, and other wholesome folks. We felt happy until we were charged 10 Euros for two beers …

Madrid had beaten us. One afternoon was not enough time to even pierce the surface of this old, hardened, monied city. It had us figured out. Happy folks surrounded and ignored us. Stunning women cast us contemptuous looks. My old friend from Lausanne, Usue, who lives in Madrid, failed to meet us, something I had really looked forward to. We surrendered and went to bed early, lulled to sleep by the thumping of techo music late into the night.

The next day was the end. At 6am my alarm went off. It was a cheerless moment. I put off the inevitable for 5 more minutes, laying in bed thinking dark thoughts about my failures and shortcomings. Jason and I showered and packed up. Outside the streets still contained bands of revelers who had had a really good night. I thought we would have an hour or so for coffee, but passing by the metro stop, Jas revealed that his train left within an hour! The time had arrived! I gave him a hug, and we parted. I imagine I won’t seem him again until Christmas.

I was metal detected, X-rayed, had to take off my shoes, and turned upside down and shaken at least 452 times on my flight home. Does all of this really serve any purpose? Do the security folks ever find any evildoers? To pay back the US, which has been driving all of this nonsense, Europe now has special lines marked “Americans only.” Sometimes it seems quite random. Passing through a certain line, an employee discovered that I had a lighter (!) and promptly confiscated it. He playfully flicked it on and off, then placed it in a bin along with hundreds of other lighters. The New York Times tells us these are sold at auction. It seems like an extra tax or fee you must pay in order to fly.

When I first started flying, it seemed that I was always placed next to beautiful girls. Back then I must have been protected by the patron saint of virgin flyers. Now I always end up next to … for example on this trip:

For one of my five flights, however, the saint really came through and between Madrid and Zurich I sat between 2 beautiful girls.

What pleasure! My pulse races—of course I will have to speak with them, or else I will have missed a great opportunity. Two women present a special challenge. How to keep them both happy?

One of the girls was a political science major from Sunnyvale (basically where I live) kind of random. She could not stop saying obvious things like: “Oh my god, Spain was so much fun!” and “If the flight is late we’ll miss our connection to New York!” and my favorite “I hope the plane doesn’t crash!”

The other girl was more interesting: a german au pair who studied Spanish instead of English. How cool! We had to speak in Spanish, which is automatically more fun. She was cute and laughed at my jokes. I liked her.

I flew across France, over the English channel, over the Irish sea and Ireland herself, Maine, Long Island, and finally into NYC. We are at a high peak of civilization to be able to pay 1 week’s wages and tranquilly watch movies and eat dinner while sitting 40,000 feet in the air—and then to become cynical and bored with it! Ha—will this last? The gargantuan, super-complicated planes fill the airports—testifying to the power and wealth of their sponsor countries—Swissair, Air Madagascar, Pakistan International Airlines—burning fossil fuels, shaking the earth and the air. It never fails to awe me.

I got back to my apartment at about 11pm, for a healthy 24 hours total travel time. According to the internet the distance between Mountain View and Madrid is 5804 miles. That’s an average speed of 241 miles an hour for 24 hours. If I was walking continuously at 4 miles an hour, it would have taken me 5804 miles / 4 miles an hour = 1451 hours / 24 hours = 60 days of walking.

Here in Mountain View things seem to be much the same as I left them. Gatsby the cat is amazingly untraumatized by his two weeks of solitude. This morning I went to my coffee shop and it is still filled with geeks and nerds, although the pretty barrista is still there as well. Google has activated its free citywide wireless network, so I now have free internet in my apartment! I spoke with some friends, my parents … Tomorrow it”s back to work: yay! Hopefully I will be able to conserve some of the energy and enthusiasm that travel always brings and apply it to my real life.