Photos are tricking in. Here are some that Louise sent me …

The figure on the road sign appeared regularly alongside the route. We called him Michael Jackson because Louise pointed out that he seemed to be slapping his derriere. The concrete marker is an example of the type found along the entire trail. They appear several times per kilometer (at intersections or points of confusion, and usually include the number of kilometers left to Santiago). 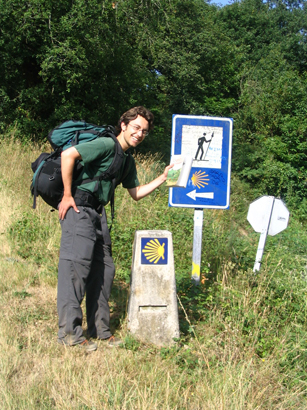 Louise is a graphic designer from South Africa and one of the few Anglophone girls we met. She was quite clever and energetic so it was love at first sight. 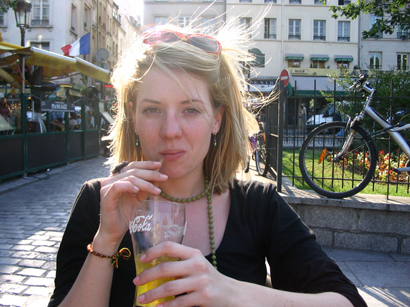 Louise and I went drunkenly into a shop at midnight and bought cigarettes from an infinitely patient old lady. It seemed quite different from the sort of thing we would be doing at home, so we laughed and had my brother take a picture of us drinking in a shop. You can see us flaunting the cups of wine we carried indiscreetly into that commercial establishment. 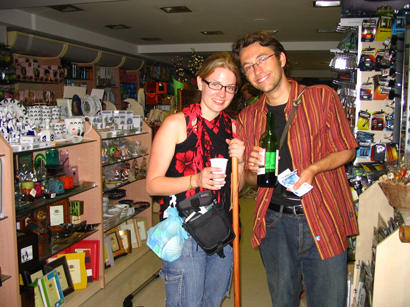 The Camino crosses a river here over a bridge that is 1500 years old. It is called ‘Puente Ribadiso’, which the ancient pilgrims used to rhymingly pun as ‘Puente Paradiso’ – it is a very pleasant spot and a group of young pilgrims are playing a game of polylinguistic volleyball in the river. 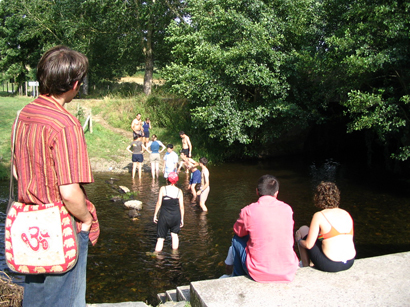 The façade of the cathedral in Santiago de Compostela. This cathedral supposedly contains the remains of James, 4th apostle to Christ. 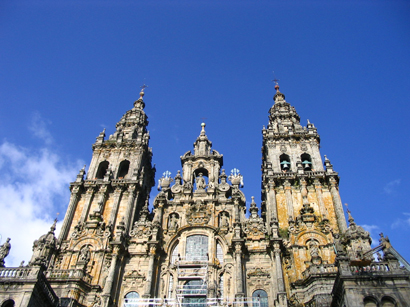 My hippie brother with a German girl who walked from her house (+3 months of walking time)! They are sitting in the plaza in front of the cathedral 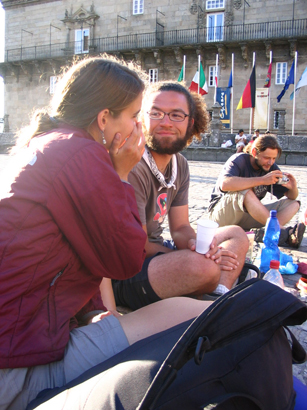 The couple in purple and blue are two quite young Germans. They are 19 years old, and chose a long distance walk (ie purgatory) for their vacation. Very commendable. They taught Jas some German.