Unfortunately there is much more to write than I have the appetite (or time) for! I will have to try to catch up later.

The first few days of walking were quite hard. At the end of the first day, I wrote to Meg (using the iPhone, more on that later):

I was standing in the cabine telephonique five minutes ago trying to call you … but having some issues with the old telephone card … and extremely tired / freezing from the autumn weather here, so decided to write you an email instead. Tomorrow night (ie around 9-12 am PST) I will make a bigger effort with the telephone.

Suffice it to say that I am quite happy, experiencing a volcano of socialability here in the olde EU… ;) In a real small and cute French town … soo tired though!! Holy crap. I will sleep like a freaking baby.

It rained today (but only for a few hours) and we walked 30km which is plenty far—the French part of the camino does not have as many historic sites as the Spanish part … but it seems to have quite good accomadations and there are a surprising # of pilgrims considering the time of year.

The churches in France have not been well maintained. When I visted Mathieu in Bourges, we went to see the cathedral there—which is huge—one of the most interesting things about it, I thought, was that all of the statues had been left in their post-French-revolution state, that is to say—they had all had their heads chopped off. So you saw the typhanum of the cathedral with a bunch of headless statues. So—in terms of the history of France and Spain, France s tripped the church of the majority of its possessions and power at the time of the revolution, that is, 1792, whereas in Spain, the church retained / retains much more power, and folks are more religious in general. For example, tonight here in Pamploma at 7:30 the church bells rang and the streets were full of older folks walking to the cathedral for mass. This has a direct effect on the quality of the art / preservation of the churches you see along the route. Anyways, that is my theory. I suppose it must be more complicated than that, since there are some beautiful and well maintained churches in France, but I would wager the theory would hold up en gross. 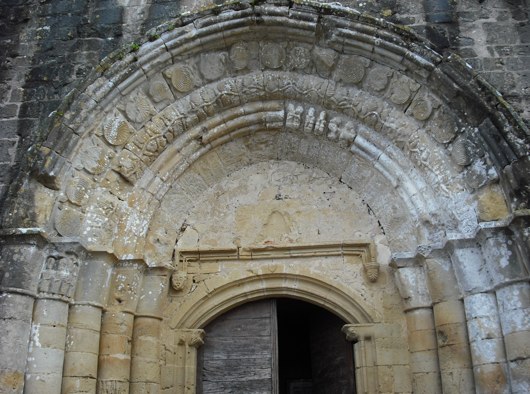 As we can see, it’s in quite poor shape. The statues are missing from the tympanum and the archivolt seems to have been disassembled and reassembled at some point, as it is inconsistent: there are plain blocks, blocks with geometric shapes, and a small section that contains figures.

Here is a detail photo of the small figures you see at the top of the rightmost column: 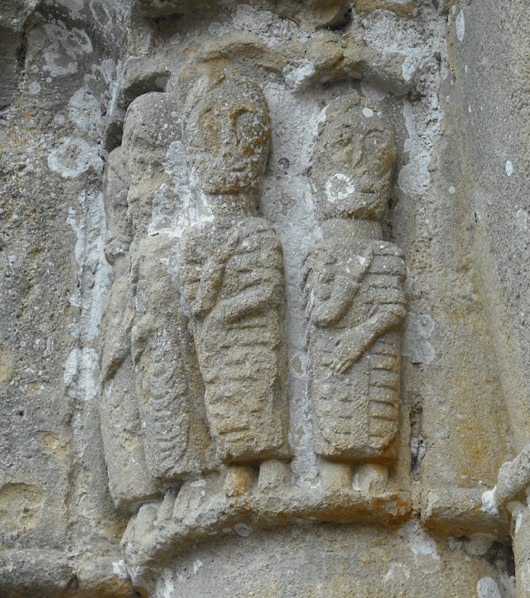 Detail of surviving figures on capital of column of Pimbo’s church.

Pimbo had other attractions though, a beautiful albergue with a very nice hostess who welcomed us and served us coffee. It is somehow a heavenly experience, to be practically dead from 10 miles of walking, and then to stagger into the most convivial little room with posters, chairs, a cat, and a charming lady who serves you coffee and questions you about your experience. 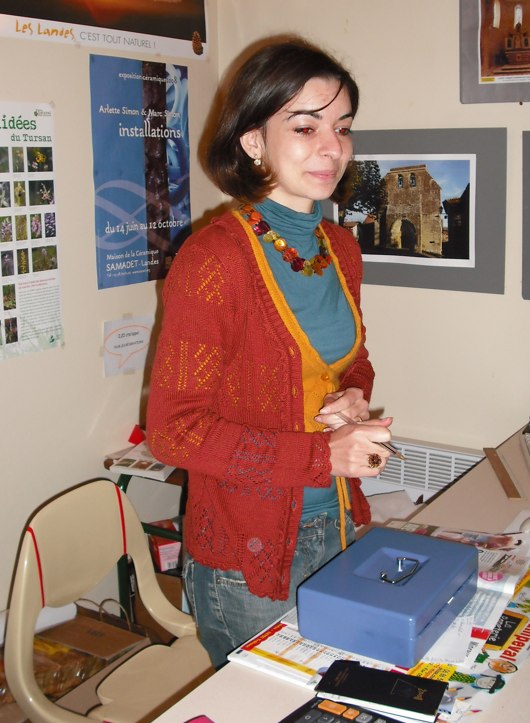 The auberge hostess at Pimbo who served us coffee and made very pleasant conversation.

Here is Andrea with the auberge’s cat—they had worked out a compromise on the seating arrangement. 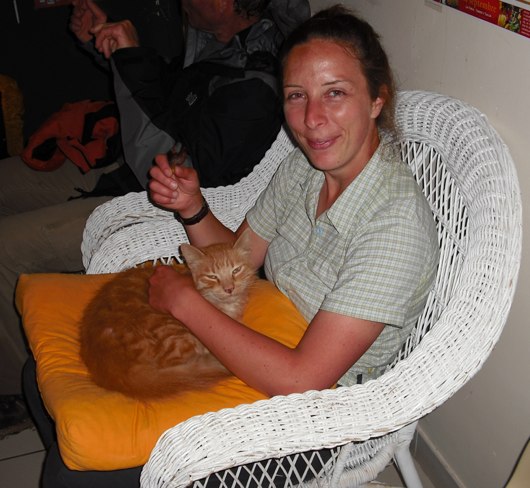 Later that evening we came into Arzacq-Arraziguet, got our first view of the Pyrenees in the distance, and ate a very nice meal with the other pilgrims. I was surprised by how many there were, perhaps 20-30…

Our first view of the Pyrenees:

The first view of the Pyrenees in the distance.