This past weekend I attempted another ‘public transportation backpacking trip.’ This time however I brought along my girlfriend—which ended up making things more adventurous, and well, yes, more fun, although, I had to modify my exquisitely prepared plan.

What is the Skyline-to-the-Sea trail?

First things first. Skyline-to-the-Sea is a 30 mile hike from Castle Rock State Park (which is up on the topmost ridge of the Santa Cruz Mountains) down to the Pacific Ocean, passing through Big Basin State Park on the way. Big Basin is a pretty fantastic spot, the first California State Park, and with a great history based around the preservation of the awesome old redwood trees that are there … 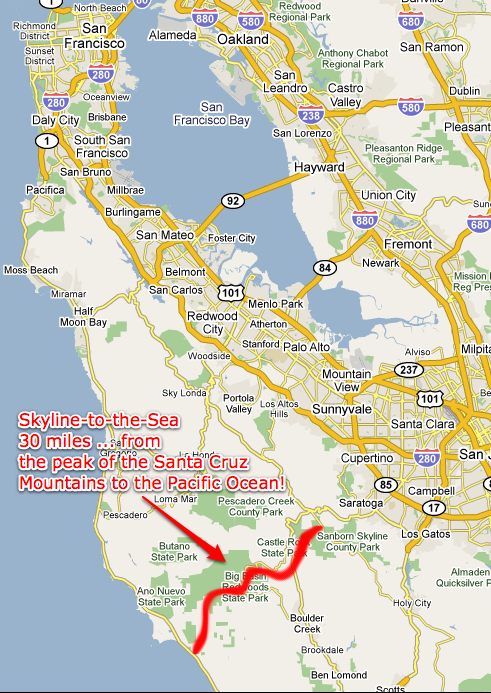 It’s the ‘crown-jewel’ of hikes in the Bay Area (as I have heard it called) … and so I had to do it, since I have been having a backpacking renaissance lately.

How to do it with Public Transportation

Well—first of all, it makes good sense to do it that way, because it’s a through hike, that is, not a loop, so in order to do it with a car, you would either need two cars, or someone to pick you up when you’ve finished.

At the Pacific Ocean end, you can get the Santa Cruz bus system to pick you up at Waddell Creek and take you to Santa Cruz.

However, you can’t get to Castle Rock State Park with a bus. My solution was to get to Saratoga with buses and then take a taxi the rest of the way … the taxi cost $30. 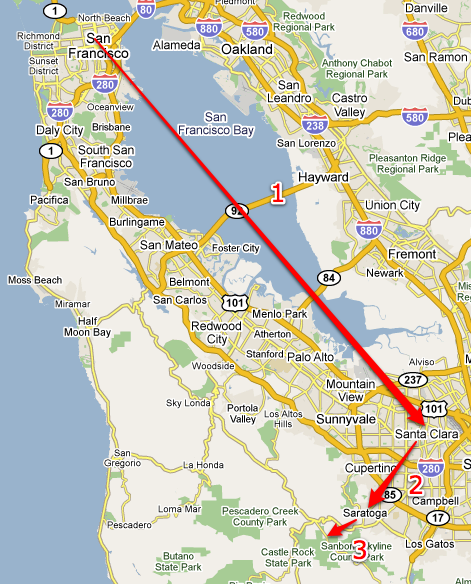 Here’s a google transit page showing the route from Santa Cruz to San Francisco. (Google doesn’t seem to know about route 40 (step 1 in the table above)—which goes along the coast.) 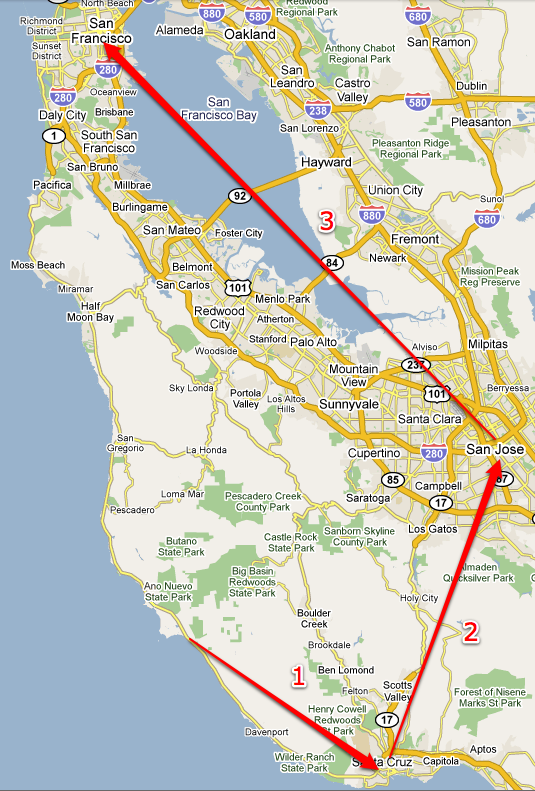 You need permits to stay in the Skyline-to-the-Sea backcountry campgrounds. In my experience they weren’t hard to get … we did it on the fourth of July weekend and had no problem getting the reservations.

This seems to be the official page with the information (the Skyline-to-the-Sea has a sort of scattered internet presence, I find):

The PDF file they list there is especially useful with the telephone number to call to make the reservations, information on fees, and a table of mileages between camps.

831-338-8861 is the number of the Big Basin State Park HQ, and they are also the office which takes care of reservations for Skyline-to-the-Sea.

My experience was basically this:

I called the number and reserved one night in the Waterman Gap Trail Camp, and one night in the Twin Redwoods Trail Camp. I mailed them a check for $5 to secure the reservation (a reservation fee). They mailed me a little blue postcard which acted as proof that I had paid. When we started the hike, at Castle Rock State Park, I showed the postcard to the ranger there, and paid her another $20 which was the actual campground fee. A little confusing, but hey, it works.

You can buy some awesome maps of the area for $13 from the Sempervirens Fund … I would suggest getting these. You can order them online, or we also saw them in the information center at Big Basin State Park.

We left San Francisco at 8:15am on July 4th using Caltrain. The bus dropped us off at the ‘West Valley College’—this is about 1.7 miles from the Saratoga downtown … so we were worried for a little while that there was no such thing as a Saratoga downtown … however, there is, it just took a little walking to get there—here’s the route we took: 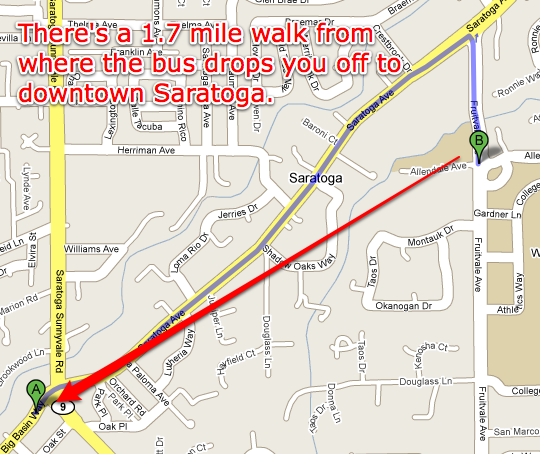 We got there around 11am and ate a really nice lunch in an Italian Restaurant ‘Ristorante Da Mario’ … to fortify ourselves for the trek ahead we had to drink at least two good Birra Moretti! 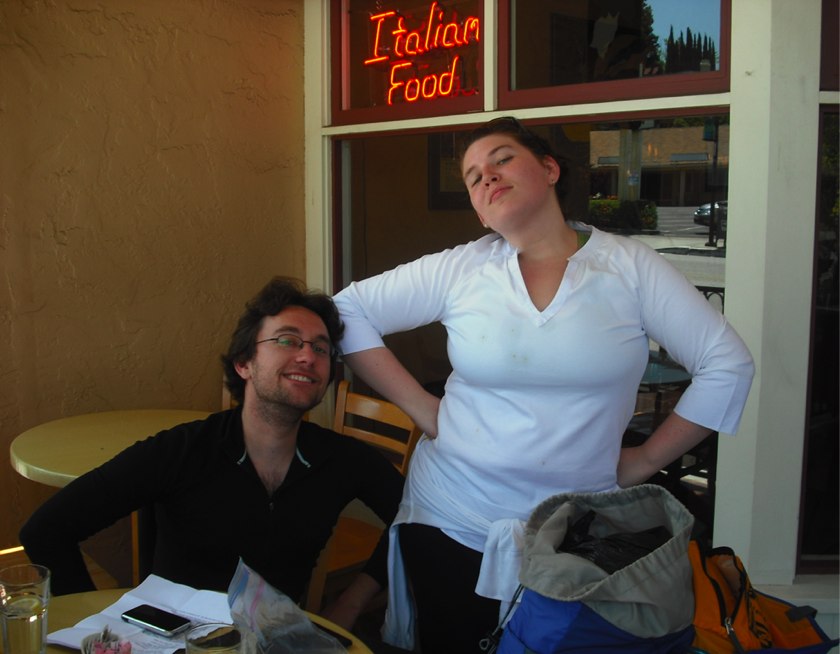 Then we called the taxi (San Jose Yellow Cab: 650-321-1234) … the driver showed up and took us up to Castle Rock State Park—a beautiful drive. It cost about $35 dollars including tip. 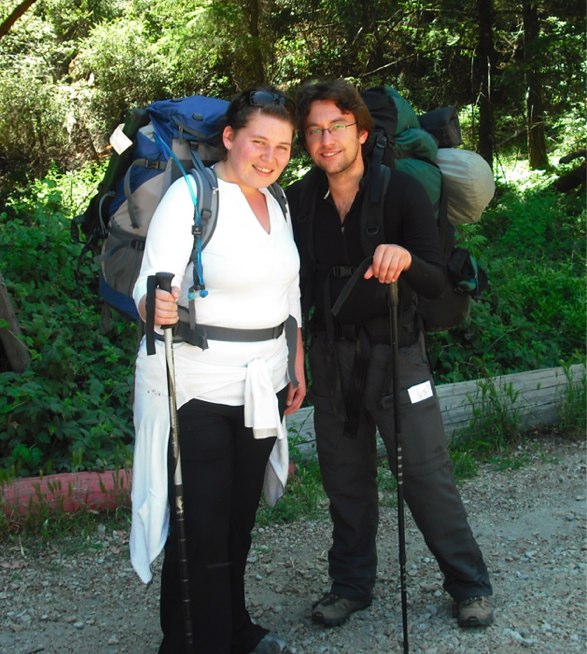 At Castle Rock State Park we showed the ranger lady the reservation card we had (see above) and paid her $20 cash to pay for the campsites. (It costs the same no matter how many nights you camp, pretty cool, huh?) 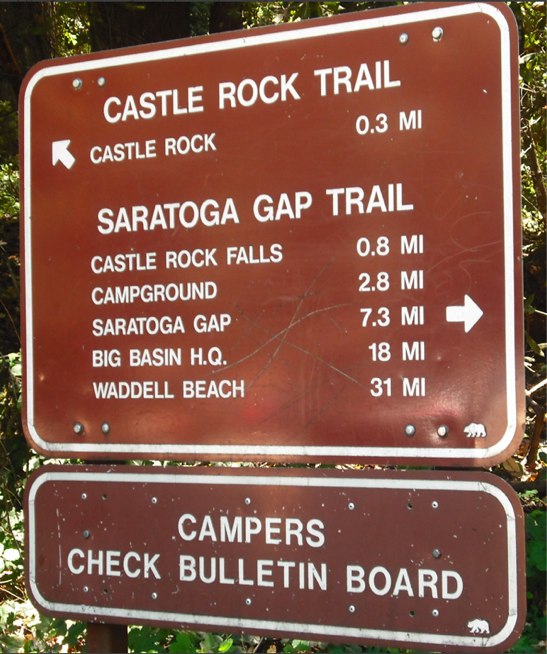 The first afternoon we had about 10 miles to hike. The first portion of the trail goes through Chaparral … it’s fairly exposed to the sun and also fairly rocky, with steep drop-offs. So we were fairly hot and the hiking required attention. 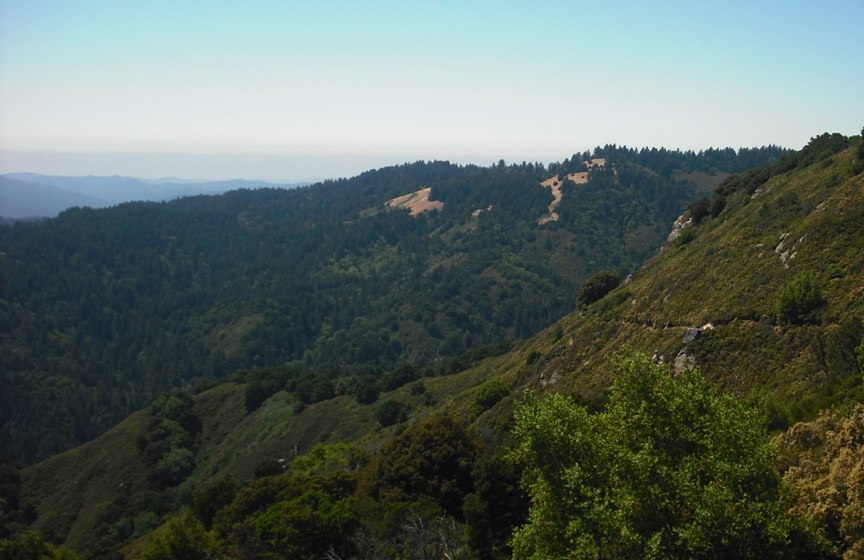 About 1/3 of the way to Waterman Gap (only about 2 miles from the Castle Rock Parking Lot) is the Castle Rock Trail Camp … if you arrive very late, you could stay here—they have water available, a pit toilet, and—what’s awesome for a devoted fire worshiper like myself—they actually allow campfires and even sell firewood there in the camp. (Self service, but only during the ‘winter’ / ‘not fire season’.) 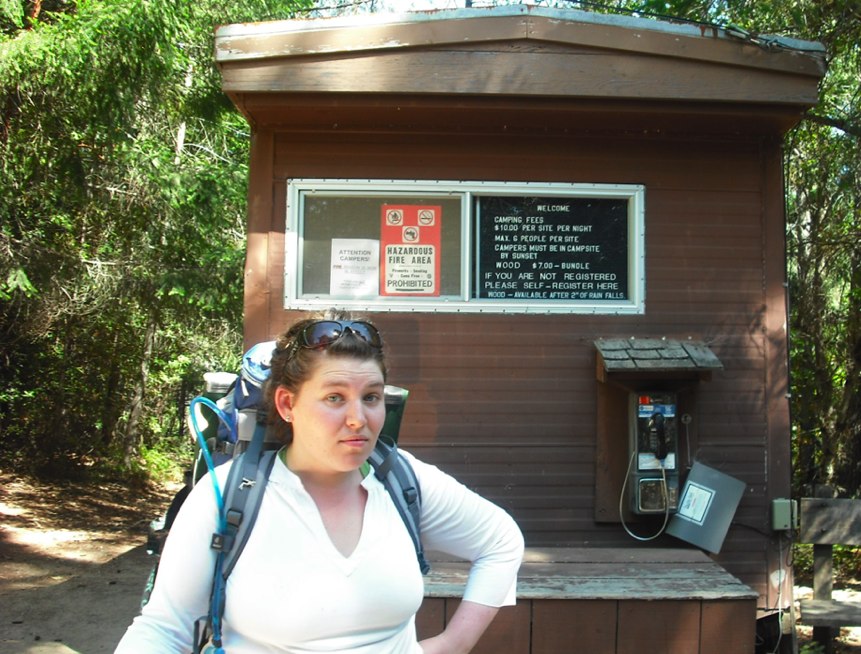 The trail was a little confusing from that point on. We took a wrong turn and ended up going to ‘Frog Flat Campground’—and had to backtrack. That added about 4/5th of a mile to our hike. I had quite stupidly forgotten to bring the maps that I had ordered online (see above)! It was just about the worst thing to forget as … without a map, you feel like you are a bit blind, and you can easily get confused. 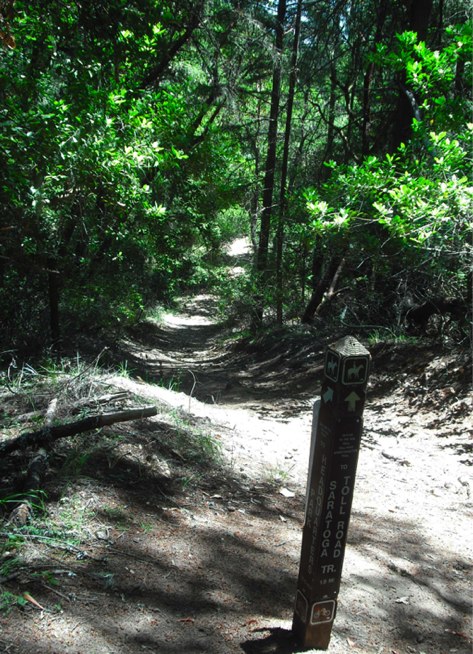 Meg was pretty tired that night when we finally arrived at Waterman Gap. To all boyfriends who want to take their girlfriend hiking—don’t be ambitious guys, be sure to start small. ;)

The next day we kept hiking from Waterman Gap down to the Big Basin State Park HQ—another 10 mile hike. The trail was a little easier, with more relatively flat and spongy trail through pine forests and less rocky and exposed trail along chaparral. In a few places the trail did emerge and we had more beautiful views towards the ocean: 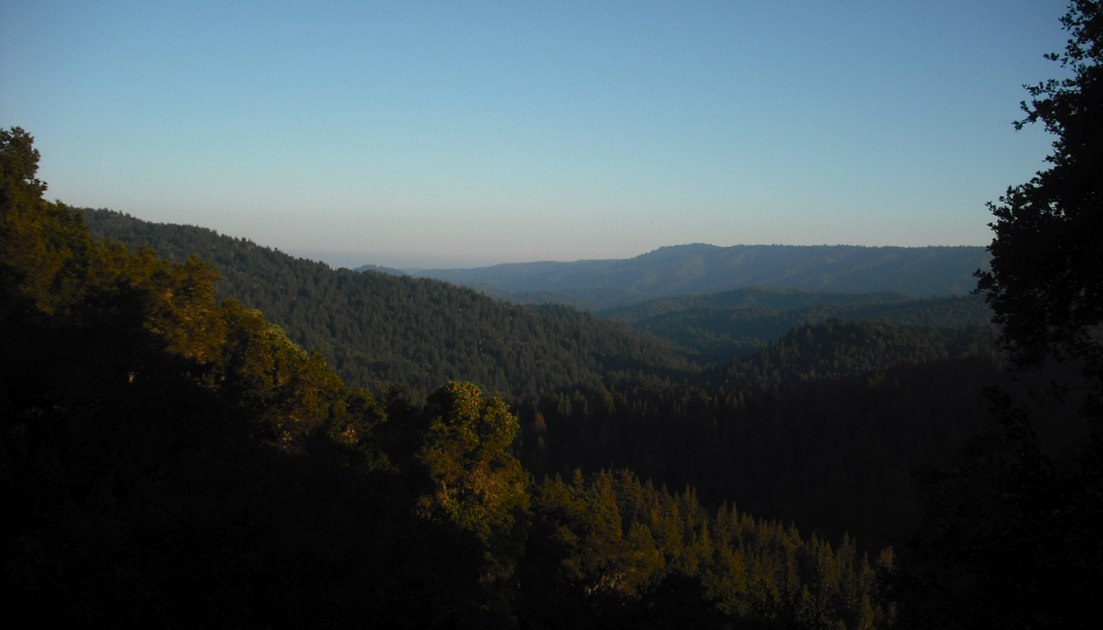 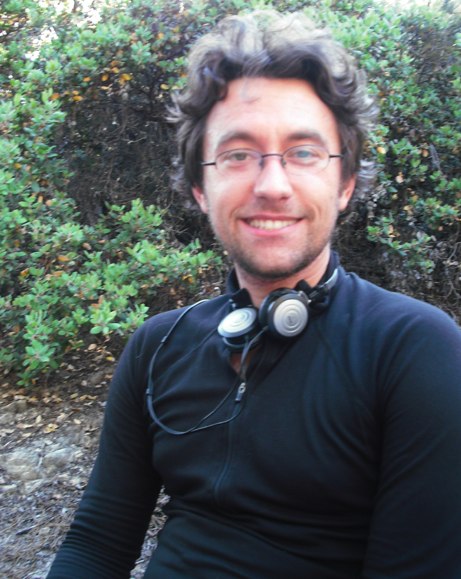 Unfortunately, by the time we got to Big Basin HQ, we were exhausted. Meg especially did not have the right shoes for the expedition and her feet were very painful. It’s one thing to be ambitious for yourself, but I made the mistake of expecting Meg to make the same sacrifices as myself.

We stayed in one of the ‘hike in’ campsites at Big Basin HQ … they have nice facilities and allow you to have campfires. Unfortunately the campsite is two miles from the Big Basin HQ! We were very discouraged at this news (2 more miles of walking!!)—and Meg and I plopped down on a bench in front of the HQ and started sniffling and looking miserable. Graciously, the rangers took pity on us and offered us a ride to our campsite in their truck! We were touched, and felt much better. Thank you to the Big Basin HQ ranger staff. ;)

The next day I couldn’t bring myself to put Meg through more pain so we discussed together and decided to try to hitchhike to Santa Cruz. We obtained some cardboard and sharpies from the camp store and made this awesome sign: 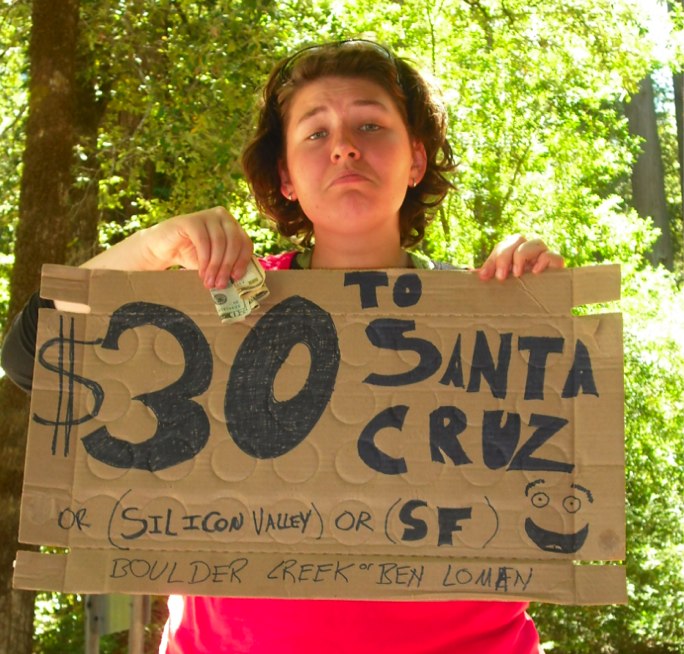 After about two hours of sticking our thumbs out, one of the employees drove us down to Boulder Creek: 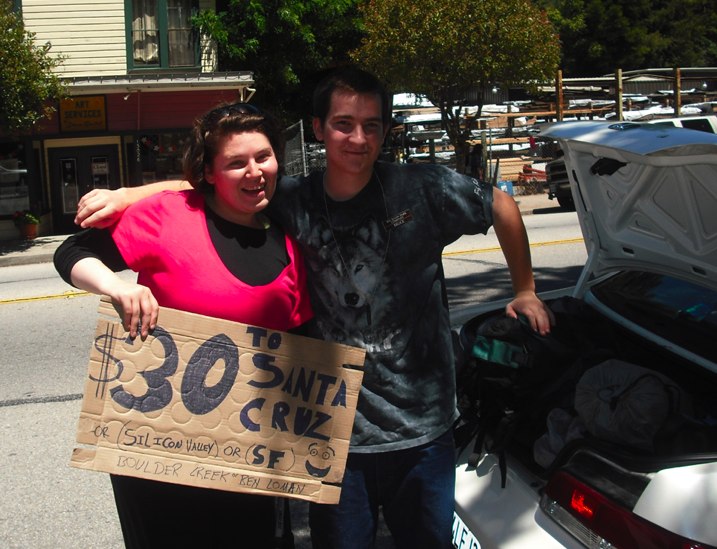 From Boulder Creek we were able to head down to Santa Cruz using buses. We checked into a hotel (with an awesome hot tub!) and cleaned ourselves up. Then we went for a walk on the boardwalk and watched the moon rise—and we were happy.

So everything ended up fine. And it’s fun to have an adventure!